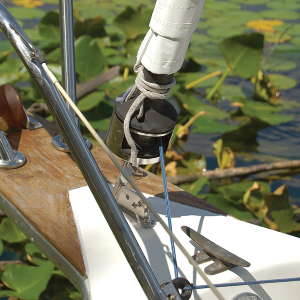 Follow the links below to learn more about our build specification

Large or small, your cruising boat should have a furling system. Your old hank on head sails have done your well, but now is the time to replace it with a furling headsail from Precision Sails and a furling system from CDI Furlers. The Flexible Furler can be used to both reef and furl your sail in any wind condition. The simplified design increases the system's reliability while lowering the cost. Head sail furling systems| Furling Systems| Furler| CDI Furler| Harken Furler

In designing the Flexible Furler, CDI focused on the vast majority of sailors who are primarily cruisers or daysailors. They might race but only casually. These sailors have boats under 40 feet long and want to enjoy sailing from the cockpit rather than going forward while underway. They want the reliability of a solidly built furler/reefing system backed by an unbelievably comprehensive warranty and yet do not want to spend a lot of time and money buying or maintaining their equipment.

The CDI Flexible Furler is used on daysailers as well as offshore passage makers, monohulls and multihulls. It is used by production boat builders and is also great as a retrofit. The flexible luff extrusion makes it the best choice for trailerables.

Whether large or small, your cruising boat or daysailer should have a furling system. Going forward on any size boat is potentially wet and often dangerous, particularly if your crew is inexperienced. Changing sails as the wind comes up is not a lot of fun! The Flexible Furler can be used to both furl and reef your sail in any wind condition.

CDI has eliminated expensive features only hard-core racers demand, thereby increasing the system's reliability while lowering the cost. As proof of the success of this design, Practical Sailor reports 100% of Flexible Furler owners surveyed would buy their Flexible Furler again if they had the choice. We are very pleased with these survey results since CDI was the only major furler manufacturer to receive that level of owner endorsement.


For a full review and unboxing of CDI Furlers please click here or follow the link below:

Ball Bearing Options:
Ball Bearings are not required for the FF1 through the FF6. However, if you expect consistently heavy loading or want the easiest possible furling, the ball bearing is a good option and may be purchased with the system or as a retrofit. (The FF7.0 and 9.0 always come with ball bearings.)

Installation Notes:
In order to properly size a Flexible Furler, you must know both the wire and turnbuckle size. Flexible Furlers are designed to install over 1x19 cable laid wire. They will not install over rod rigging or inside out Navtec turnbuckles. The headstay should have a swage-on stud and an open body turnbuckle at the bottom end of the headstay assembly. Sta-Loc or similar swageless fittings can be used at the upper end of the headstay assembly but can not be used at the bottom end as the fitting will not install inside the furling drum properly.

What makes a CDI Flexible Furler different from the rest?

The Flexible Furler is warranted to remain functional for 6 years from date of purchase. You must be the original purchaser of the unit. If, during this period, any part becomes non-functional, CDI will repair or replace it, free of charge, except for freight.

The Flexible Furler warranty does not cover:

Assembling a Flexible Furler is relatively simple and can usually be done by anyone with a #2 Phillips head screwdriver, a hacksaw and a pair of vice-grips. It can be done with the mast up or down, and, after the luff extrusion is straight, can be done by one person (though it is nice to have a helper to read the instructions while you do the work).

Luff Straightening Instructions:
If you receive your Flexible Furler luff via UPS, the first part of the assembly process is to straighten the luff. (You'll notice a bright colored instruction sheet on the outside of your luff box.) This should be done within a day or two of receipt. Straightening takes three people for the FF1 and FF2 and four people for the FF4 and FF6. Strength is not required, just the number of people in order to control the long coiled extrusion.

The hard part is over. Please note, if the straightening process seems ominous, we can ship the luff in a 6' hoop or via truck.

Remember, the installation manual has more complete instructions including pictures of parts to make installation clearer. Assembly should take no more than two hours after straightening the luff.

The Flexible Furler can be used with a new or existing sail, but the sail must have #6 luff tape on the leading edge rather than hanks. It is always best to discuss the design of a new sail or the conversion of an old sail with us before ordering your furling system, as there are several other options that you might like to incorporate in your furling sail. These include:

Remember, it is best to discuss these items with us first, taking into account the condition of your sail, the type boat you sail, the area and wind conditions in which you sail and the way you anticipate using your boat. Only the addition of luff tape and item 2 must be done. The others are improvements and not always necessary.

The CDI Flexible Furler ranked #2 in quality of reefing performance in the 1996 Practical Sailor owners survey, just one percentage point out of first. CDI customers felt the CDI system was better than Furlex, Harken, Schaeffer and Profurl. (There have been no other furler owner surveys since 1996.)

When you reef your sail, the amount of cloth rolled up is the same at the top and bottom as it is in the middle. Because of the shape built into the sail, rolling the sail will leave an increasingly large belly in the middle of the sail. The amount you can reef and still have an acceptable shaped sail varies depending the flatness of the sail and whether or not there is a padded luff. In most cases, reefing to approximately 70% of the original LP (a 150% genoa becomes a 105% genoa) is about as much as you can do. If you don't care about the shape of the sail (if, for example, you are sailing with the wind aft of the beam) you can reef more.

If you anticipate reefing frequently, we may advise you to add reefing features to your new or existing sail. (See Sail Conversion.)

The Flexible Furler has been designed to endure the rigors of frequent mast raising and lowering as well as trailering. Because the luff is flexible, it can withstand frequent bending. But remember, plastic is a liquid, and will take a set if left bent for a long time.

General Maintenance:
The Flexible Furler requires no maintenance to keep the warranty in force; however, it is always good to keep the system clean. Usually, dousing the drum with fresh water every 5 years is adequate. If you have a ball bearing installed, we recommend lifting the drum and being a little more purposeful in cleaning the bearing. This is a 5 minute procedure.

Storage:
The luff extrusion is best stored straight, perhaps strapped alongside the mast. All but the FF9.0 can be coiled in large coils, but if left in that position for prolonged periods, the luff may take a set that will have to be removed by coiling the luff in the opposite direction.

Canvas & Accessories
Click The 'Request Quote' Button And Tell Us What Type Of Sails You’re Looking For!
We’ll Email You A Quote Within 24 Hours!